Three Models for Change was a group exhibition with artists Chris Alton, Ian Giles and Greta Hauer curated by MA Art History and Curating students at the University of Birmingham, in association with Grand Union and hosted at Stryx Gallery.

Curated by Ryan Kearney, Alice O’Rourke, Ariadne Tzika in collaboration with Grand Union and the University of Birmingham, Three Models for Change, will take place at Stryx in Minerva Works, Digbeth, June 2018.

Three Models for Change was a group exhibition asserting the importance of historical awareness in establishing future potentials of communities. The works in this exhibition fluctuate between three actual and staged narratives: the formation of a fictional Quaker-punk band; the staging of cross-generational Queer histories; the uncertainty surrounding a newly formed volcanic island and its territorial disputes.

References to utopian moments, groups, and places question current socio-political systems, offering possible new ways of thinking and being. Three Models for Change is an ambiguous statement and this exhibition embodied neither utopian nor pragmatic outcomes, but instead provided a platform of shared histories to stimulate thoughts around alternative futures.

Chris Alton’s Still Anarchy brings together two seemingly separate groups, Quakers (mid-17th century) and Punks (mid-1970s). What at first appears to be a contradictory juxtaposition, both groups share several key similarities: they originate from periods of socio-political unrest and enact resistant strategies. This commissioned installation stages the potential of a fictional Quaker-punk band imagined by the artist.

Ian Giles’ film After BUTT engages discussions on BUTT Magazine (2001-2011), the shared nature of distributed ephemera, and Queer permanence. Recorded, transcribed, re-enacted: the men depicted, each of whom were cast based on their resonance with the text, perform Giles’ conversations with the magazine’s founders. Presented in an exhibition of speculative change, it encompasses the importance of intergenerational awareness within communities and how this can influence a movement towards Queerer futures.

Greta Hauer’s Vigorous Activities explored the potentials of Nishinoshima, a newly formed island comprised of volcanic mass (November 2013), 1000km off the coast of Japan. Due to its distance from mainland Japan, Nishinoshima has expanded the Japanese Economic Zone, and is continuing to do so, heightening the existing conflict within the South China Sea. A topographical model, set of fictional writings and commissioned video work re-enact the rise of the island and its disruption of the seemingly utopian model.

Performance: Rainbow Flag / Trojan Horse
Saturday 9 June 2018 | 5-6pm
Recent Activity, 80-82 Floodgate Street, Digbeth, Birmingham B5 5SR
Ian Giles presented an immersive performance drawn from scripted conversations with the activist group which campaigned against the closure of The Joiners Arms, a Queer pub. Through role-play and texts, the play’s participants collectively unpacked what a queer space is and could be.

Grand Union Programme Assistant Laura Onions sat down with curators Ryan Kearny, Alice O’Rourke and Ariadne Tzika to discuss how they worked together in developing Three Models for Change, their approach to working with artists and the underpinning ideas for the exhibition. 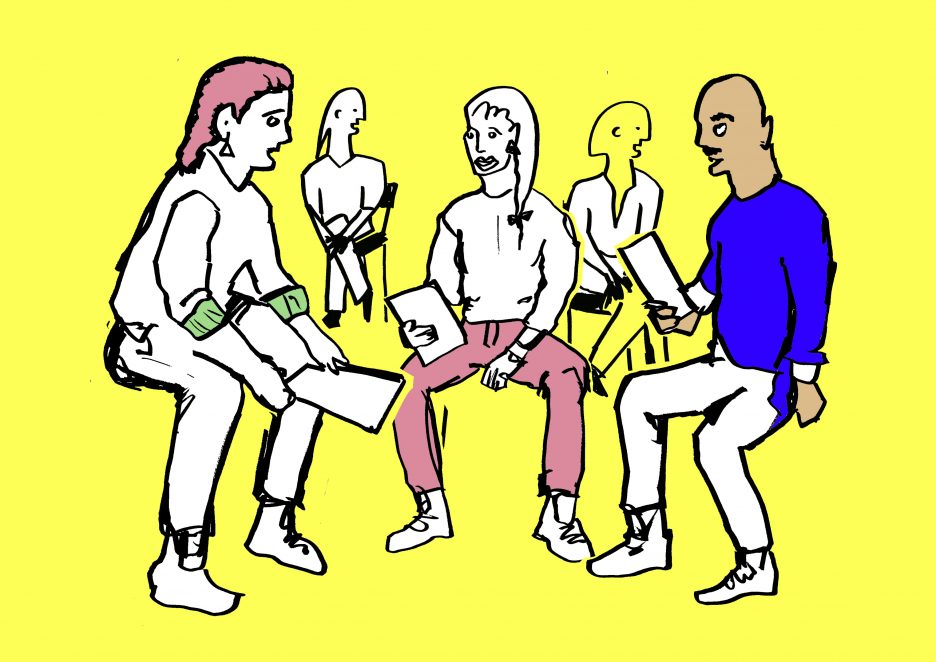 Betsy Bradley, Gareth Proskourine-Barnett and Rafal Zajko
On the Subject of Precarity